Compare our different sandal models to find your best fit. Learn how to adjust your Bedrock Sandals. Learn more about getting your Bedrocks Re-souled or repaired. Exchange or return your Bedrocks. Equipped with our new Hook-heel strap, freedom-feeling flat footbed, and extra-sticky Vibram® Megagrip outsole, the Cairn Pro II gives you superior footing no matter where you wander. The new Pro II G-hook and loop system locks in the heel strap like it does the front, for a super secure fit that won’t fail in the frothiest rapids or thickest silt. New G-hook-and-loop heel and front strap system creates an extra secure foothold that won’t gum up in mud or pull off in whitewater.

Minimalist footbed conforms to your feet for superior ground feel, flexibility, and packability.

Premium Quality: We spent years sourcing the best materials in the world, so you can spend maximum time enjoying the outdoors. The Cairn is USA Assembled of Domestic and Foreign Parts.

1% For the Planet: We proudly donate 1% of your purchase to environmental non-profits. You may also dig

Thank you for submitting a review!

Your input is very much appreciated. Share it with your friends so they can enjoy it too! 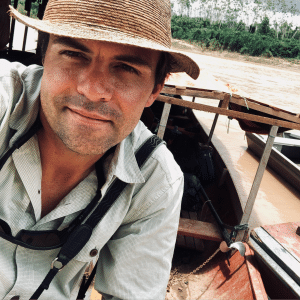 Well made and comfortable -- but all the reviews say so. This is about me ... I have weird feet ... wide with high arches ... it's why zero drop barefoot is so good for me ... but getting anything -- especially minimal shoes -- to fit them right can be hard. If I can make them fit at all, I'm usually at the limits of the adjustments, which makes a GOOD fit hard. As was the case with my bedrocks when I got them ... not their fault, but familiar to me ... I wrote them as I write all the shoe companies (weird foot awareness campaign), but unlike all the shoe companies I got back not only clear and accurate advice on what was up and how to adjust them, but also an offer to send them back to get a little customization to make them actually fit properly ... which I took them up on and it worked perfectly. They know their stuff and stand behind their stuff and now I know when I order my next (and next and next) pair I can ask for the tweak and make them just right.

I'm still in a break in period. Some people want to put shoes on and right a way feel comfortable. I've grown to know the feeling of a good sandal at the start usually isn't very comfortable and after a good month they start to take the shape of my foot and last much longer and feel wonderful. These feel like they will become my new favorites. I wear sandals 90 percent of the time so longevity as well as comfort are key. I'm very hopeful for these, but it is still too early to know for sure.

The only shoe/sandal I want to wear ever

I cannot recommend these sandals more. Absolute 10/10 in every way possible!

I've been curious about trying minimalist shoes/sandals for quite a while, particularly for hiking. After exhaustive reading, video watching, and a massive amount of analysis paralysis, I decided to go with Bedrock for several reasons. Lots of people had a lot of good things to say about them, but I really was sold on the ability to have them re-soled. I mostly do a ton of trail hiking, and ever since I first bought them, I've used them for every hike and a lot of everyday wear as well. Probably only have 100-150 miles in them so far, but they've been amazing. Leg muscles get a little more sore than in my more "traditional" shoes, but that is quickly becoming less of an issue. They're also incredibly comfortable, and very well made! I typically wear a 10.5 wide in my work boots. I ordered a size 11, but in hindsight should have ordered a 10. They still work great, but I'm sure I'd be a little better off with a smaller size. No big deal, since I plan on purchasing some classics, which I'll get sized in 10 and compare. That's literally my only "complaint" and it's also something I could have addressed, but didn't care to, since it really isn't an issue. Really loving these sandals!

Absolutely love my new Bedrocks starting with the printable size chart (which was spot on). They're well made, comfortable & cute. I anticipate they will last through many hiking adventures.